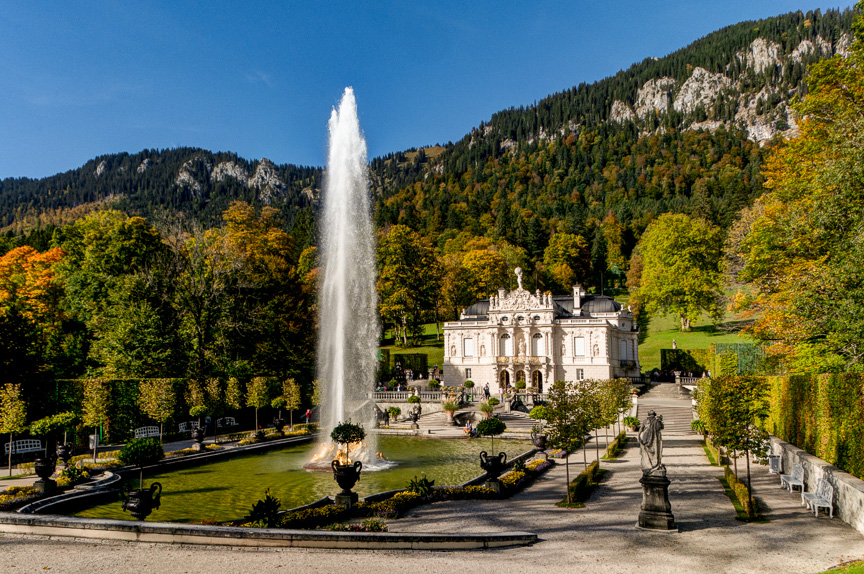 King Ludwig II of Bavaria built three magnificent structures during his reign of just over 20 years. His fairy-tale castle, Neuschwanstein, is world-famous, and truly one of the most recognized symbols of Bavaria. At Herrenchiemsee Palace, the Bavarian Versailles, you learn just how big Ludwig’s dreams were – and see first-hand just where the money ran out. But at Linderhof Palace, where Ludwig spent most of his time, and the only building he actually finished, you gain keen insights into the man himself, his passions, his aspirations, his delusions, and his struggles.

The palace itself is compact, extravagant, and astonishing. Perfectly nestled in a remote mountain valley, the palace – Ludwig’s defacto home – is augmented by the surrounding French gardens. In front of the palace is a marvelous pool with a geyser-like fountain, which erupts from a gilded sculpture on the half-hour. The hill opposite the palace has two terraces, replete with flowers and fountains, and is topped by a round, neo-classical temple dedicated to the goddess Venus.

These grounds include several other curiosities, the most famous being the infamous Grotto, a man-made cave designed to be the setting for one act of Ludwig’s favorite Wagner opera. It was the first structure with electricity in Germany and includes a pool big enough for a small skiff, yet could be heated to spa temperatures.